The rainforests and eucalypt forests across Australia contain many bush food plants that are likely to provide significant health benefits.

Healthy eating in our own backyard

Australia is home to a huge diversity of significant plants. The flora of Australia has ancient biological links with Africa, India and South America, and a more recent connection with Indonesia. As a result, the Australian flora contains relatives of many medicinal and food plants, including all the significant plants of the spice trade. Australia also provides native citrus, native bananas and wild rice (see the Australian Virtual Herbarium – http://avh.chah.org.au/). The traditional knowledge of which plants are edible, and how to prepare them, is an expertise for which Aboriginal and Torres Strait Islander peoples deserve respect and acknowledgement.

Australian native plants, and their produce, should be sourced from reputable horticultural growers and produce suppliers. These include north Queensland suppliers Rainforest Bounty near Malanda https://www.rainforestbounty.com.au and Rainforest Heart near Millaa Millaa http://www.rainforestheart.com.au, Green Harvest in southern Queensland https://greenharvest.com.au, Daley’s fruit tree nursery in New South Wales https://www.daleysfruit.com.au and Diemen Pepper in Tasmania http://www.diemenpepper.com  (see for example https://anfab.org.au for a larger list of suppliers). It is not recommended that you eat fruit, leaves or tubers etc. from plants in the wild. Absolute caution would be required before tasting any plants growing in the wild because the required certainty in identification can be difficult, with many plants that look similar to bush foods being highly poisonous, and some bush foods require special preparation prior to eating. 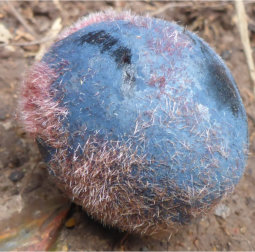 (Davidsonia jerseyana, D. johnsonii and D. pruriens) are rainforest trees that grow naturally on the east coast of Australia. Wild populations of Davidsonia jerseyana are only known from rainforest in northern New South Wales. Davidsonia johnsonii grows in the rainforests straddling northern New South Wales and southern Queensland. Both Davidsonia jerseyana and D. johnsonii are rare in the wild. Davidsonia pruriens originates from the rainforests of north Queensland. All three species are cultivated, although D. pruriens is the most commonly grown commercially. The plums are dark blue and about 4 to 6 cm in diameter. Davidsonia plums are cooked and made into popular jam and savoury condiments. The edible flesh of the fruit is quite tart and is therefore not typically eaten raw. Uncooked Davidsonia plums contain cyanogenic glycosides that release hydrogen cyanide when chewed (McKenzie 2012). In addition, D. pruriens has irritating hairs on the surface of the fruit that must be removed before eating. There is a single, old report of a person vomiting and having epigastric pain after eating unripe, raw Davidsonia plums (Flecker 1945, referred to in Hegarty et al. 2001).

The fruit of Davidsonia pruriens contain the carotenoid lutein, which is essential for eye health and has been shown to help mental performance, for example increasing the processing speed of visual information (Bovier & Hammond 2015). They also contain the flavonoids myricetin, quercetin and several anthocyanins in high concentrations, especially cyanidin-3-sambubioside and delphinidin (Netzel et al. 2007; Konczak et al. 2012). Similar anthocyanins in blueberries are thought to enhance the growth and survival of brain neurones and to have an important role in learning and memory. In one laboratory trial, a fruit extract of D. pruriens inhibited the proliferation of cancer cells in a Petri dish almost as well as blueberry extract (Sakulnarmrat et al. 2015). In another laboratory study, D. pruriens extract was found to inhibit the activity of alpha-glucosidase, an enzyme that helps promote the absorption of glucose from our food (Konczak et al. 2012). This means that D. pruriens fruit can potentially reduce glucose absorption and help keep blood glucose levels low.

Combined, the phytochemicals present in Davidsonia plums likely make it a healthy fruit of particular value to our mental capacities (although these benefits may be offset if large amounts of sugar are mixed with Davidsonia plums during jam production). 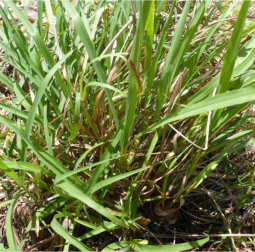 The seeds of several Australian native grasses were an important source of food to many Aboriginal people, being edible after processing by such means as grinding and baking (Pascoe 2014). These include native millets (Echinochloa turneriana and Panicum decompositum), kangaroo grass (Themeda triandra), sorghums (e.g. Sarga leiocladum) and wild rice (Oryza australiensis, O. meridionalis and O. rufipogon). Some of these native Australian grasses have been found to have considerable nutritional values. For example, Australian wild rices have higher levels of several minerals, such as nitrogen, calcium, magnesium and zinc than cultivated brown rice, Oryza sativa (Wurm et al. 2012). Cultivated rice contains several beneficial phytochemicals, such as anthocyanins and luteolin. It is likely that wild rice contains many of the same phytochemicals with their associated health benefits.

The leaves and stems of Australian lemon grasses (especially Cymbopogon ambiguus and C. obtectus) and lemon grasses from other countries have been used as teas to relieve symptoms of chest infections, headaches, muscle cramps and sore eyes (Avoseh et al. 2015; Cribb & Cribb 1988; Grice et al. 2011). The commonly cultivated lemon grass (C. citratus), which originates from South East Asia, contains the polyphenols caffeic and chlorogenic acids and flavonoids apigenin, kaempferol and quercetin (Avoseh et al. 2015). The Australian lemon grass C. ambiguus contains the terpenoid oils eugenol and elemicin, which have been found to inhibit factors associated with headaches. They can reduce blood platelet aggregation and promote the release of serotonin 5-HT (Grice et al. 2011). The researchers found that eugenol inhibited the inflammatory-causing enzyme COX to the same level as aspirin. Eugenol is also present in nutmeg and cloves, and is useful for relieving tooth aches. Eugenol and elemicin are probably also present in several other Cymbopogon species.

Several native grasses have the potential to provide valuable, healthy food crops, some with the benefit of being perennial species that maintain top-soil structure (Pascoe 2014). From an ecological perspective, Australian grasses contribute much of the plant diversity in many eucalypt forests and woodlands, and of course grasslands. However, the abundance of numerous Australian native grasses has declined considerably over the last century. Australian native grasses can be conserved in their ecosystems through a number of actions, depending on the location and threat. These include reducing the smothering impact from introduced exotic pasture grasses, implementing regular, low intensity burning under mild conditions with good soil moisture, and keeping the combined grazing pressure from livestock and native herbivores to a moderate level. 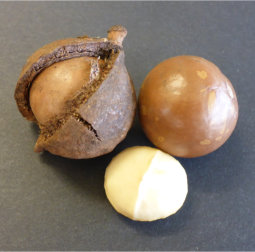 Macadamias are Australia’s most well-known bush food plants. Cultivars and hybrids of two species of macadamia trees, Macadamia integrifolia and Macadamia tetraphylla, are grown commercially across eastern Australia, see for example https://www.macadamiasaustralia.net/ and https://www.wondaree.com.au. They are also grown in subtropical regions around the world. The Macadamia Conservation Trust http://www.wildmacadamias.org.au contribute to the long term preservation of natural populations that grow in rainforests of northern New South Wales and southern Queensland. These wild populations are considered vulnerable to extinction due to a number of reasons including forest clearing, as well as weed invasion and inappropriate fire regimes (Costello et al. 2009).

Macadamia nuts can help with weight management, because their high healthy fat and fibre content quickly relieves hunger, helping reduce over-eating. Macadamias contain many health promoting phytochemicals. These include phytosterols (especially campesterol and beta-sitosterol) which are similar to cholesterol, and thought to compete with cholesterol absorption from the gut, leading to a balanced cholesterol levels (Duester 2001). A variety of studies have found that regular consumption of macadamia nuts reduces total and LDL ‘bad’ cholesterol, while maintaining HDL ‘good’ cholesterol levels (Munro & Garg 2008). In one trial seventeen men with high cholesterol ate between 40 and 90 grams of macadamia nuts daily for four weeks. Eating macadamias lowered the levels of compounds in their blood that are indicators of oxidative stress and inflammation that can contribute to cardiovascular disease (Garg et al. 2007). The men also showed reduced blood platelet aggregation – that is, macadamias helped thin their blood.

The monounsaturated omega 9 fat oleic acid, abundant in macadamias, reduces inflammation by inhibiting the protein NF-kB that triggers inflammation within our cells. Oleic acid has been found in a laboratory trial to reduce beta-amyloid peptide-induced brain nerve damage through its ability to reduce inflammation (Kim et al. 2015).

This site is dedicated to improving our understanding of phytochemicals, especially their capacity to contribute to our long term health… Read more

Phytochemicals are typically grouped into the following broad categories, with many vitamins (such as vitamin C) also considered phytochemicals… Read more

The Health Benefits of Phytochemicals

How to grow your own Phytochemicals

How plants are grown affects the concentration of phytochemicals. Cultivation techniques can be refined to enhance the… Read more 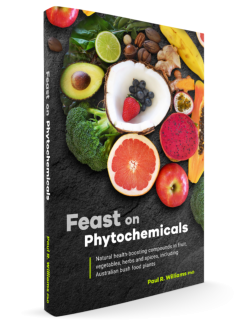 This book brings the science of plant compounds to people interested in healthy eating and nutrition. It interprets the latest scientific research about health promoting phytochemicals that are supplied to us in common fruit and vegetables (including nuts, legumes and whole grains), herbs and spice.